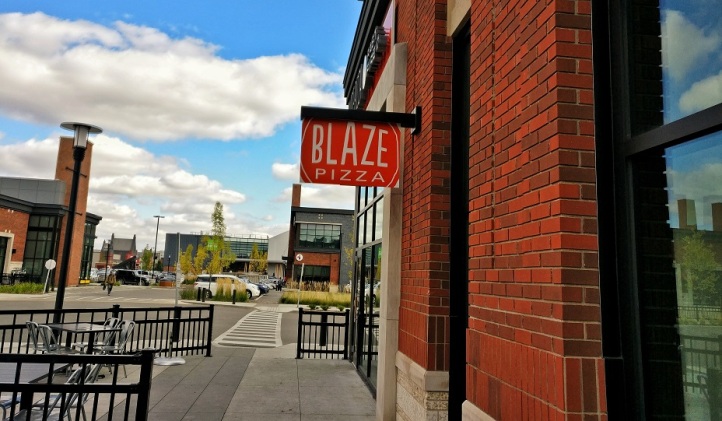 Last week, I went to Blaze Pizza for the first time. I went to the one that is in Brewery District. For those who haven’t been there, it’s just to the west of Oliver Square. The entire District is pretty nice now, what with City Market there, and the new Good Life Fitness. It’s a pretty nice neighbourhood, with lots of up and coming dining options.

I live really close to Love Pizza, so I never really had a reason to go to Blaze, but I figured I should probably give them a try. There is a location North Edmonton as well, which has been around for quite some time, but I almost never venture in that direction.

Blaze has a build-your-own pizza type of model, similar to that of Love Pizza. Since it was my first time, they recommended that I choose one of their base pizzas, and then tweak it to my liking. So I opted to get the Meat-Eater, which by default, comes with pepperoni, crumbled meatballs, red onion, mozzarella, red sauce. When Love Pizza first opened, they went from as many toppings as you want, to a suggested four, to a hard 4, with extra toppings being $1.50. Blaze pizza still has an unlimited amount of toppings in their model.

I had my eye out on all the possible ingredients that were there, so I could think about how to best build my own pizza the next time. For this one, I just opted to get the spicy red sauce instead, added some ricotta cheese, jalapenos, and swapped out the crumbled meatballs for Italian sausage. My sister opted to get one of their vegetarian signatures with no changes excepted added ricotta.

They cook all of their pizzas in a fire oven, which can be seen from the till area. It takes a bit longer than Love Pizza, but not too bad. The staff tend to the pizza fairly regularly, moving it around it spinning it so that one side doesn’t get burnt.

My pizza was pretty good. The crust was nice and thin, and everything was how I would have expected. For me, it’s kind of difficult to choose between the Love Pizza and Blaze. They are comparable in price, size, and toppings are relatively similar with a few things different options at either places.

Overall, I enjoyed my experience at Blaze. Given the toppings and options, I know I can build a really tasty pizza here. Ultimately, for me, it comes down to convenience. I can build a good pizza at both Love Pizza and Blaze, and they both have pretty good crusts. I’d recommend both because they are both great options for some quick, easy, customizeable and tasty pizza!