First of all, let me preface this post by saying that an All-You-Can-Eat restaurant is completely different from a regular restaurant. There’s a huge difference in quality and there is a balance with quantity and variety. I’ve eaten at a fair amount of Japanese restaurants in the city (Japonais Bistro, Sushi Wasabi, Yokozuna, Ichiban, etc. I don’t even know if I could name them all!). If you want quality over quantity, then I recommend you stick with one of the aforementioned places.

However, sometimes, I’m just in the mood for AYCE. After hitting the gym, or you’re just plain starving, this is definitely a good spot to hit. I’ve heard terrible things about Zen, so I cannot really comment on it since I’ve never been, but I’ve been to Sushi Garden before for their AYCE so I kind of have a frame of mind for comparison (and I don’t think it’d be fair to compare it to some of the AYCE places in Calgary because they are way out of Edmonton’s league).

I’ve been to Watari a few times now… once when they first opened, another time about six months ago, and then again a few weeks ago. Since my first visit, they’ve increased their prices a bit, but still kind of in the range of the other AYCE places in Edmonton. What stands out to me though is the fact that you can order all the beef tataki that you want! Otherwise, their menu is relatively similar to the other places, with a few exceptions. This occasion I went with a group of six friends so we got to order a lot!

This is their seaweed salad. Nothing too amazing, we just wanted to have a small appetizer. We also tried their bean sprout salad as well. Good flavours, nothing too bold. It’s exactly what you expect from a seaweed salad.

I think the beef tataki is one of my favourite things to order. Definitely a must-order, and definitely a bonus that it’s unlimited. Everything kind of balances together. The sauce might be a little bit too strong, and could overpower the rest of the dish, but overall it’s pretty good. The garnish is just seaweed and onions and it complements the meat very nicely. It’s relatively fresh and good, and consistent throughout my various visits.

You’re allowed to get a variety of sashimi here, but I usually stick with salmon, tuna, and a little bit of surf clam. I’m not really a huge fan of red snapper. I find it to be a bit too fishy. The sashimi here is relatively fresh. I find that depending on when you come, it can play a factor on how good the sashimi is. Out of the times I’ve been here, it’s been pretty good. I can’t really complain about it. Maybe it was a bit closer on the warm side than cool. I’ve been once where it was served on ice, and I think that was a really nice touch, but if it’s busy in here, than it can come out a little bit later than you would hope.

This is their Hawaii Pokey salad. Just some cut up pieces of raw salmon with onions served with a nice sauce. The onions were a bit strong and maybe could have been lightly sautéed first and chilled before mixing. I think it would have given it a bit of sweetness and reduced the strong flavours a bit.

This is their beef short rib. It comes out relatively hot. One of their better kitchen items, in my opinion. It has good flavours. I generally like this cut of beef. I find it to be relatively moist and tender. Some people don’t like it because the bone makes it a little bit harder to eat but overall I think it’s worth it. 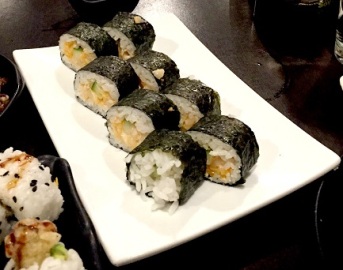 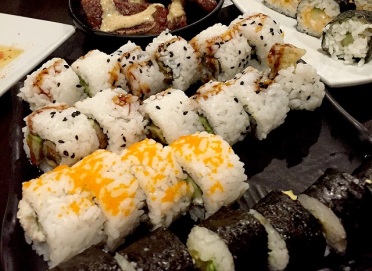 Here are some pictures of their rolls. There aren’t very many items on the menu that has unagi, but they do have an unagi roll so that’s one of the ones I generally get. My first two visits, the rolls were kind of typical, nothing amazing, but nothing too bad. However, on my third visit, the rice used in the rolls was terrible. It was definitely way over done. Not to mention the rolls were completely filled with rice and barely had any fish or filling in it. It was really mushy, and not very well done. I hope that they were just having an off night, and not just trying to skimp out on their rolls because it definitely made a poor impression on me.

This is their assorted tempura. I don’t think there is much I can say about this. All the vegetables came out cooked properly. The yams weren’t undercooked which can sometimes happen. I liked how they used smaller broccoli florets. Some other places use giant broccoli florets for their tempura and I find that it can just be a little bit too much. It was lightly battered and nice and crisp, served with tempura sauce.

This is their chicken karage. Out of all of their kitchen items, this is also one of their better options. The chicken itself was not too dry and the sauce was not too overpowering. It’s worth it to just get one to try or share with your friends.

Their grilled squid tentacles were actually pretty flavourful. They tasted nice a smokey from the grill and were cooked perfectly. Sometimes it can get chewy depending on how long it’s cooked but I found these to be well executed.

These are their sake meat balls. Little bit dry, and to be honest, a little bit underwhelming. I think maybe they put too much filler, maybe breadcrumbs or something, or cooked them from too long but they were just really dry, and they did not have a good flavour.

This is their volcano roll. One caveat to their menu is that they have unique names for some of their rolls, with little to no description to what it is. Every time I see volcano roll, it kind of reminds me of the volcano roll at Japonais Bistro (Amazing by the way), and it makes me think that this volcano roll would be good too. I’ve been fooled every time because when all the food comes at once, it’s hard to know what’s what. Honestly, the sauce is just a mixture of ketchup and sriacha. The rice on this particular day was bad enough already. Definitely not worth it.

Finally, this is their tempura basa. This is by far one of my favourite menu items. It comes out super piping hot, and the fish is very tender. The batter is light and fluffy. The wasabi mayo on top is a nice touch as well. All three times that I’ve ordered this it was consistently good. Definitely one of the highlights of my meal. If anything, I would come back just for this item.

So, overall, I would have to say that Watari is an average experience, as long as you kind of know what to expect. You aren’t going to get the most amazing food, but there are definitely some star dishes at this restaurant. Some other notable things that I’ve gotten over my visits here are the cream cheese wontons. It’s imitation crab meat. It actually tastes pretty good, but can make you pretty full. The tacos are tasty as well, they definitely have a lot of flavours going on and it kind of balances out nicely. The curry pork is not really great in my opinion. It comes out pretty dry, and the flavour is a little bit bland. I’d rather save space in my stomach for something else.

Anyways, when considering whether or not to go to an AYCE, it definitely depends on my mood as to whether or not it’s worth it. Some nights, I would definitely prefer to spend 30$ worth on dishes at any of the earlier mentioned restaurants, and that would keep me full and satisfied but there are some nights where only AYCE can satiate me (or hot pot!).