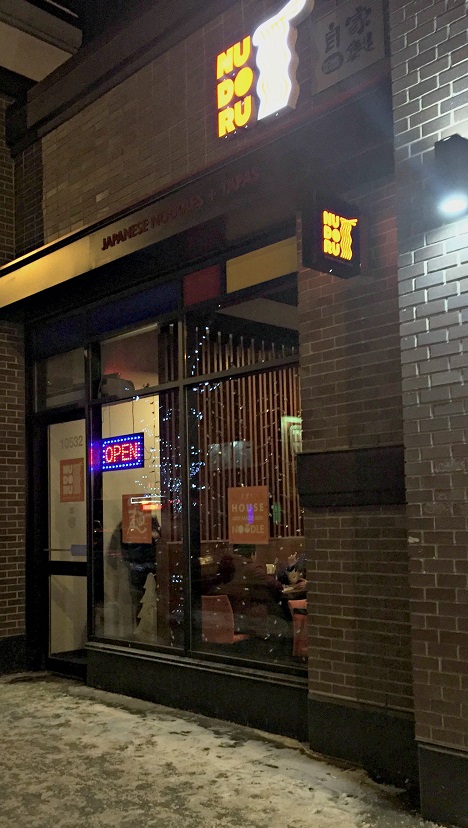 A couple weeks ago, I finally decided to go to Nudoru Ramen Bar on Whyte. They opened up in the spring last year, and now with my upcoming trip to Japan, I thought I’d get in the mood to plan my trip with a little bit of ramen.

It’s located on 105th street and Whyte, and as always, parking on Whyte can be a bit tricky. There’s street parking on both sides, but it can be difficult to find a spot, and there’s always parking on the side streets beside Whyte. 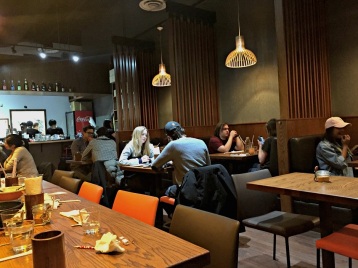 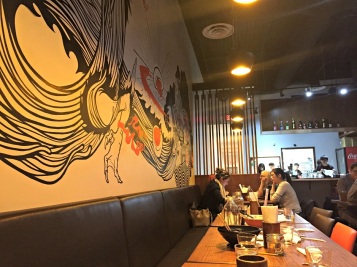 I’m so excited that Ramen is starting to become a bit more popular in Edmonton! More choices are always welcomed. And Nudoru is starting to set the pace in Edmonton by making their noodles in-house! The interior is pretty simple, with some booths on the east side of the restaurant, and small tables around. They have a pretty woody theme. And along with all of the very Japanese decor, is a giant mural of a samurai.

From the other Ramen bars that I’ve been to, this place was most similar to a Ramen Bar I went to in Montreal, Hakata Tonkatsu. They also had a build-your-own type of menu among other things. They also have bowls on the main menu, which are tonkotsu-based. On this occasion, I went with my brother and I opted to get their classic Tonkotsu, and my brother decided to make his own. In additional to their ramen bowls, they also offer some tapas to share. We decided to go with the octopus fritters and their beef tataki.

Their beef tataki is seared beef steak served with garlic infused ponzu jelly, green onion coulis, arugula, fried shallots, and crispy almonds. I’ve never had beef tataki that had so many dressings on it, so it was nice to have something that was unique. Overall, the flavour of it was pretty good, but the ponzu was really overpowering. The pieces of beef tataki were thicker than most of the other places that serve this, and the almonds were a nice touch. Not bad, but again, they could have gone a little bit lighter on the ponzu, because it was a bit over bearing.

The octopus fritters are pieces of octopus in a rice flour batter, cabbage, and served with a spicy roasted garlic aioli and maple syrup. Probably my least favourite thing of the night. When I read this, I was essentially thinking takoyaki, but it was very disappointing. It was incredibly dry, and the fritter itself just basically crumbled. There was minimal amount of octopus, if any, and again, just far too much dough.

My tonkotsu came with smoked bacon, pork shoulder, pork belly, chili menma, pickled onion, scallion, egg, and nori. Overall, this was one of the better ramen that I’ve had in Edmonton. The broth was nice and hearty, it could have used a bit more seasoning or salt, but overall not bad. There was a decent amount of meat. The bamboo shoots were a really nice touch and went really with with everything. It can be a bit more of an acquired taste, but I used to have bamboo shoots a lot growing up. The egg was not bad, but could have done with a bit more seasoning. The noodles however, were one of my favourite part. Nice and firm, you could really feel the snap in every bite. Overall, Not a bad bowl! I might opt to make my own next time though, and get exactly what I want.

My brother decided to get the miso broth, pork belly, nori, black fungus, a soft boiled egg, and scallions. I had a taste of his broth and again, I’d make the comment that the flavour of the broth could have been stronger. You could taste the hint of miso flavouring, but it could have done with a bit more. 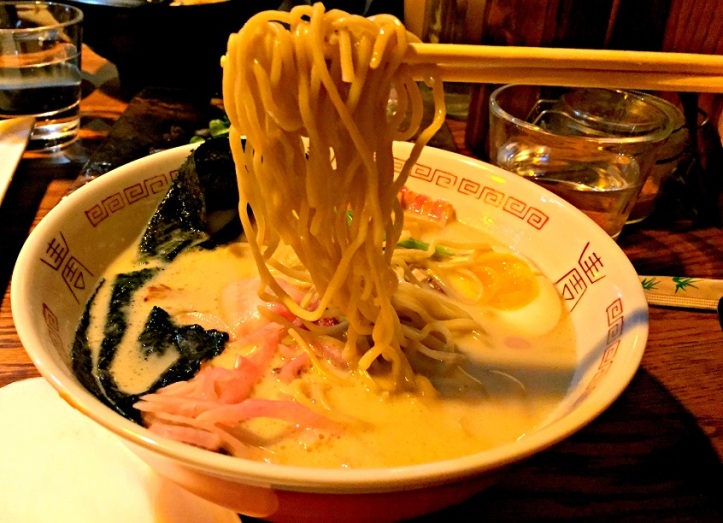 Overall, my experience at Nudoru Ramen Bar was decent. I’d come back to try a few of their other tapas, and to customize my own bowl. There still are a few more ramen places that are to open in 2017 that I’ve heard of, so I’m still waiting until I find a ramen place that really wows me. I’d definitely recommend Nudoru if you’ve never had ramen before though and want to give it a try.