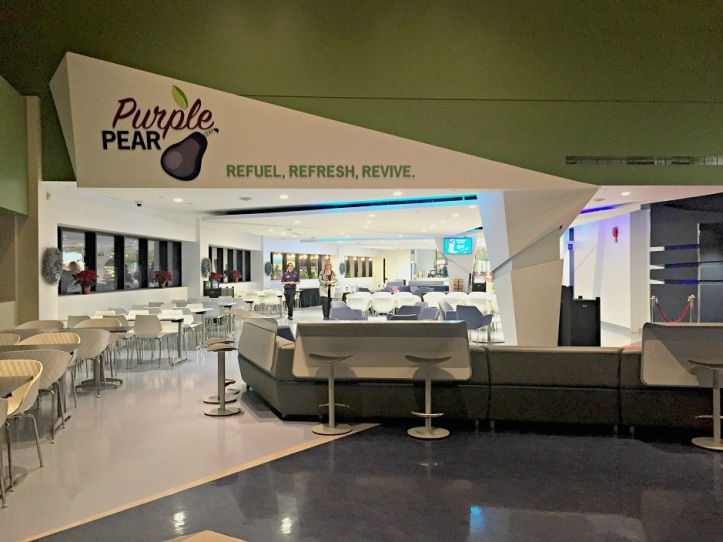 A couple of weeks ago I was invited to attend a media event for The Purple Pear, the rebranded restaurant/cafeteria inside the Telus World of Science. They were closed over the summer for renovations and opened in September. The entire interior was redesigned and furnished. I’ve never seen the old space but from what I can tell it was very highschool-cafeteria-like and the new renovations make the space look really clean, and of course, purple-themed.

The restaurant is fully licensed, so you can order alcoholic beverages if you so choose. Parking is generous, as it is at the Telus World of Science. I went with Jenn and it was one of the first freezing nights in Edmonton so the turn out wasn’t great due to last minute cancellations, but it was still a fun night. If you turn right after the main entrance, you’ll be easily able to see the Purple Pear.

The culinary team comprises of Chef Laks and a few cooks: Anthony, TJ, and Jornher. Together, they developed many new menu items at the science centre. The menu offers a variety of options, and since it is a science centre, many kid-friendly options. That night we were able to order anything off of the menu, so I opted with one of their signature pizzas and one of their artisan sandwiches.

The sandwich that we ordered was the Tuna Tataki sandwich. It comes with yellowfin tuna, maple soy marinade, avocado, spinach, alfalfa sprouts, ginger lemon soy drizzle, on a toasted focaccia loaf. I was skeptical about this sandwich at first because I couldn’t imagine there being a high enough order rate to maintain fresh tuna in-house for this sandwich at all times. Overall, it was a pretty good sandwich. The tuna was fresh, and all the flavours were well balanced. Also modestly-priced at 9.50$, it’s not a bad choice!

The pizza we ordered was the Mikhaiel, a staff favourite, which was also named after TWOSE staff member Sara Mikhaiel who helped curate the recipe. It comes with Alfredo sauce, mozzarella, chicken, bacon, caramelized onions, artichokes, goat cheese, topped with fresh arugula. I have a penchant to lean towards pizza that are served with a white sauce rather than the traditional marinara. This pizza was nice and rich, and the crust was nice and crispy. All of their pizzas are a really decent size and the price is also very generous as well.

Overall, I really enjoyed my experience at The Purple Pear. I could definitely see myself coming back here if I was in the area. They want to try and encourage people to come here, not for just being in the Science centre, but to bring in nearby locals for a quick and easy lunch. I’d definitely recommend coming here and giving it a try if you’re in the area! It’s not a bad quick and modestly priced meal!