A little while ago I was invited to Famoso at the West Edmonton Mall location to try the launch of their new fall items. Famoso launched three new items for the fall, Mac + Cheese, and two new pizzas. I went with Jenn, and I didn’t feel like we’d be able to eat two pizzas and their Mac + Cheese so we just opted to get the two new pizzas.

This was actually my first time at the West Edmonton Mall location. I figured it’d be convenient to go there and then to a movie since they are so close. There’s a lot of parking in front, but it can get pretty busy, as with the rest of the mall parking lots. Parking Gods must have been with me that day because we got a spot right in front! The interior is relatively nice and spacious. 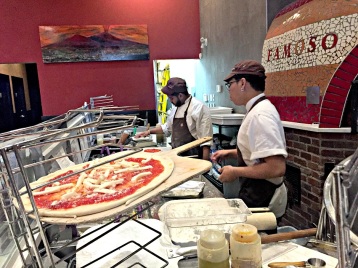 The kitchen is open and you can see that their pizza is hand-tossed by their Pizzaiolos, made and put in their authentic bell-shaped oven, which is imported from Italy! 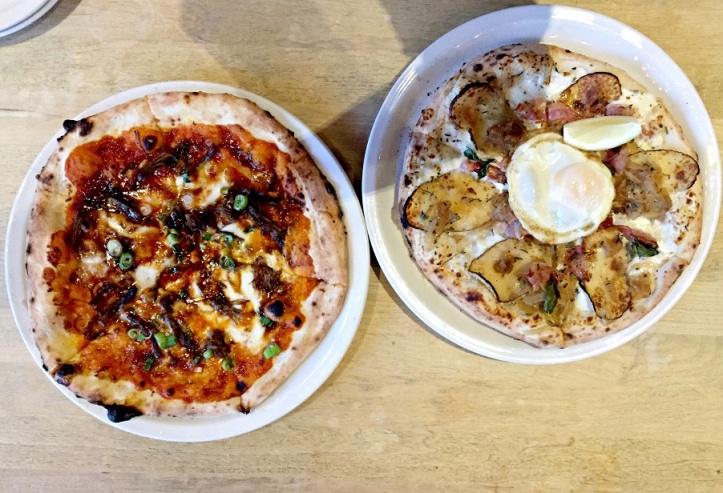 Their two new seasonal pizza are the Korean BBQ Beef pizza and the Patate Pancetta Pizza. Their ’00’ flour is highly refined and low in gluten, and they blast the pizza in their 900°F oven for 90 seconds which results in a soft and crispy crust.

The Korean BBQ Beef Pizza is topped with their house-made Korean BBQ sauce, fior-di-latte, house-roasted pulled short ribs, green onions, cheddar cheese, house-made hoisin sauce. This to me is similar to their sweet BBQ Chicken, which is my usual pizza of choice. This pizza is spicy and pretty rich on sauce. Hoisin sauce seems a bit unusual to me to be on a pizza, and it may not be everybody’s cup of tea. Overall though, still a decent pizza, just a bit too heavy on the sweet sauces in my opinion!

Their other new seasonal pizza is their Patate Pancetta Pizza. This was by far my favourite pizza out of the two. It comes with Creme fraiche, rosemary, russet potatoes, fior-di-latte, mozzarella, pancetta, caramelized onions, sea salt, Grana Padano, lemon wedge, topped with a fried egg. It also comes with white truffle oil for an additional cost, which in my opinion is worth it! All of the flavours of the pizza work well together, and the white truffle oil really brings everything together. It’s cheesy, and rich, and has a really great combination of flavours. You might think that having potatoes on a pizza but it definitely works! LovePizza also has a signature pizza with potatoes, and it definitely works on theirs too. After I put this pizza in my Instagram story, there were a few people that asked me how it was and went later that week! So, I’m glad to have been able to provide some input. 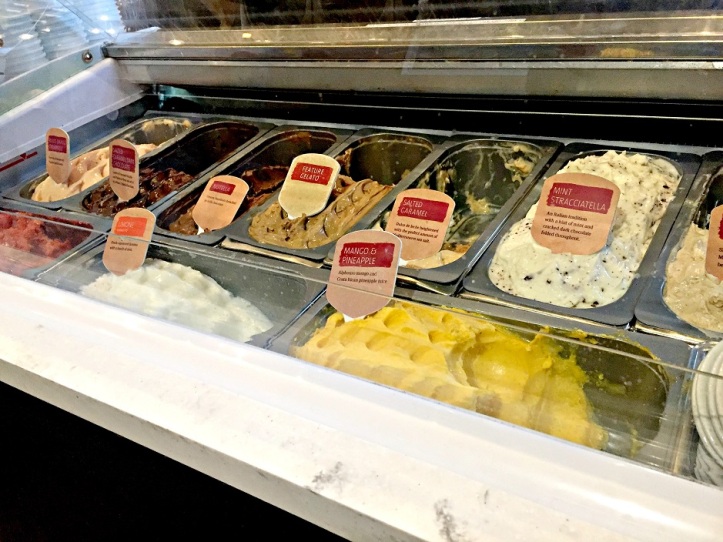 Additionally, though we didn’t get any on this occasion, they do serve gelato and sorbettto here if you’re hankering for some dessert! They have a pretty good selection here, and who doesn’t like gelato!

Overall, I had a good experience in Famoso. Though they are a chain, there still aren’t too many places where you can go and get a restaurant pizza. One of my favourite places to go for a restaurant pizza was Rosebowl, which has since closed, to my dismay. There’s still a handful of places that I need to go check out for pizza, but Famoso is so convenient and relatively cheap. They also do Cineplex deals where you can do dinner and a movie which is not bad either. If you’ve never been, it’s a good gateway restaurant for pizza.