(This restaurant is now *CLOSED* )

In the last few weeks, I’ve been really into eating Hot Pot. We’ve gone to Urban Shabu a number of times, and a few other places as well. Hot Pot have been increasing in popularity in Edmonton, and now there’s many places to choose from. They are all very similar, with slight variations. 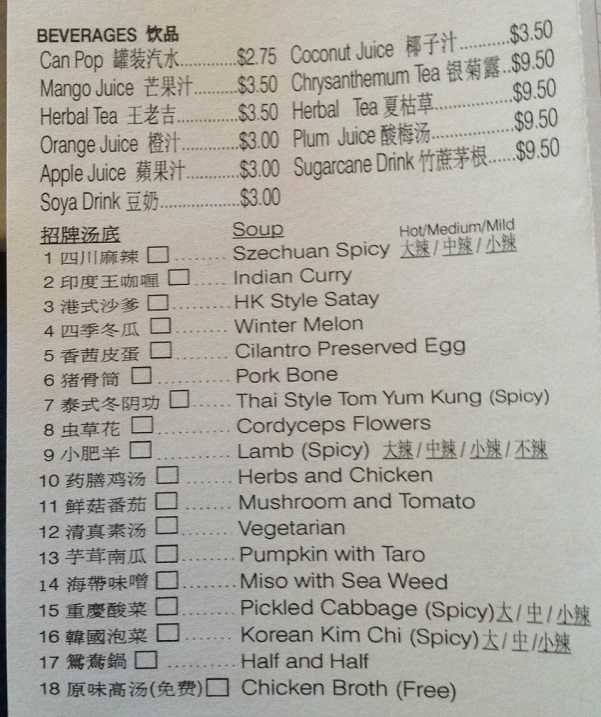 For those of you who don’t know what Hot Pot is, basically it’s what I call a version of Asian fondue. You choose a broth, and then a bunch of things to cook in the broth. You can choose between spicy, sour, plain kinds of broth. The basic chicken broth is complimentary, and you can choose to pick a different kind of broth for a little bit extra. Then, you have choices of a variety of meat, vegetables, noodles, seafood, etc. I posted pictures of the menu at the end of my post for reference of what you can order.

They are owned by the same people as Urban China. I find that the interior of the restaurant has a more clean and modern feel to it, and it’s mostly just a personal preference. The food as most of the Hot Pot places are relatively similar and the same, so for me it just mostly comes down to the atmosphere, and how enjoyable my experience is.

The sauce station at Urban Shabu is really neatly and clearly laid out. It’s nicely labelled and easy to make whatever sauce you like. I usually like two make two different kinds of sauces, one that’s just plain and simple, which is soy sauce, garlic, and a few garnishes, and another one that’s on the sweeter side, hoisin with peanut sauce.

As for things to order, I really like getting the mashes. These are handmade meat pastes that you can form into balls and put into your soup. They usually come out really tender and really enjoyable to eat. They also offer a few specialty items such as deep fried buns, green onion cakes, spring rolls, etc. Usually, when we go for hot pot, it’s just plates upon plates of sliced lamb, corn, and a mixture of different kinds of mashes.

Overall, all of my experiences at Urban Shabu has been relatively consistent and good. The service there is pretty good, and the plates of food are usually a consistent size. We used to do hot pot a lot at home when I was growing up, and especially when we had extended family over, and it’s really tied with a social gathering for me. It’s a really good experience to share with people and have good conversation, and especially on a cold winter day. If you’ve never tried hot pot before, Urban Shabu is definitely a good place to start!