Chef Hung is a Taiwanese noodle chain that just opened its first Albertan Location just off Whyte. Chef Hung has won numerous awards in Taiwan and has over 30 years of experience perfecting his noodle recipes. All of the noodles are housemade in Vancouver and flown to Edmonton. There are 4 different kinds of noodle available; thin, flat, vermicelli, and rice. Chef Hung really cares about the quality of his food and my server said that Chef Hung would not serve anything in his restaurants that he would not eat himself.

For parking, there is a small lot across the street, and then street parking along the restaurant. The interior is very well lit and clean with a simple theme. For food, I was invited as media during the soft opening and had some set items. I got the Champion Beef Shank Noodle soup, and the Champion beef brisket noodle soup and a few sides which came with the set. 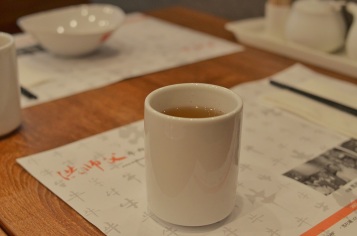 The champion beef shank noodle soup comes with lightly seared short rib slices, marbled beef, and noodles. The noodles had a nice chew to it and was quite springy. The broth in this bowl was more aromatic and the spices/flavours reminded me of a bit of Vietnamese bo kho. Of the two bowls that I tried, this one was by far my favourite.

The other bowl that we had was the champion beef brisket noodle soup. This was similar to the other broth, except it was clear. I found this broth a lot more bland and flavourless compared to the other broth. I heard from other patrons and people who went before me and they shared the same sentiment. However, on the tables, they also have house-made chili oil which you can add to your soup which really made the different. I really enjoyed the chili oil, and it’s actually available for purchase from the restaurant in small bottles!

We also tried two of their side dishes: golden kimchi and cold mixed baby cucumbers. They also offer a lot of other sides that look really good so I’d like to come back to give their other sides a try! The sides were a pretty big portion and a lot to eat on its own but they were pretty good.

Overall, I had a good experience at Chef Hung. It’s a good addition to Whyte Ave and to Edmonton. There isn’t really anywhere else in Edmonton where you can get authentic Taiwanese noodles. I would go back to try a few of their other bowls or just to buy that chili oil because it was so good!