I went to Sloppy Hoggs Roed Hus a little over a year ago, and ever since I went to MEAT a few weeks ago, I’ve been wanting to go back to Sloppy Hoggs. I remember it being really good when I went last year, and wanted to go back. Having just went to MEAT I felt that I could really do a good comparison. The last time I went, I had their ribs, and shared a couple of their burgers/sandwiches with my cousin, Thomas. On this occasion, I went with my sister, and just wanted to try their basics; ribs, chicken, pulled pork, brisket, and a few of their sides. Parking here is relatively easy. They have their own little lot, which can get a little bit busy if you go around dinner time, but there is always a lot of parking nearby on the adjacent streets. It can get a little bit busy, so I’d recommend making reservations if you can. 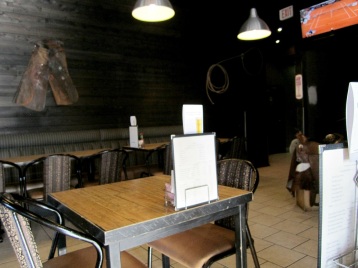 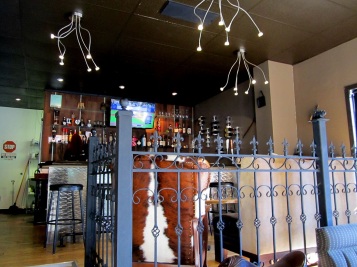 The interior of the restaurant is pretty small. They have a few booths on the side, and smaller tables in the middle. They also have a small bar in the back that you can sit. They seem to have a pretty loyal customer base that like to frequent the place. I just noticed that their online menu is actually different from their menu at the restaurant. There are some things that are there that isn’t shown on the online version, and vice versa. Anyways, for most of their smoking, they describe using an apple and maple wood blend, giving a more subtle smoke flavour. This is definitely the case, because the smokiness is very subtle, especially when compared to what you get at MEAT. I guess it boils down to your own preference. We decided to go with the 1/2 smoked BBQ chicken and 1/2 slab sloppy hogg ribs, Brisket and Mac and cheese, and a 1/2 pound side of pulled pork. This way, I could cover all my bases and do a good comparison to MEAT. For sides, we got fries, coleslaw, corn bread, potato salad, and maque choux. One bonus for this place is that their portion sizes are enormous! I got pretty much the exact same order at MEAT (1/2 rack ribs, 1/2 chicken, 1/2 pound pulled pork, and 1/2 brisket), and probably ended up with double the amount of pulled pork and ribs. I definitely had to pack up a couple boxes to bring home!

The ribs were actually really good. Their rub is a little bit spicy, and has a really good kick to it. The meat was very tender and there was a lot of it on the bone. I definitely prefer the ribs at Sloppy hoggs compared to MEAT. You get way more, and the flavour is really good!

The chicken at Sloppy Hogg’s was a little bit dry and over cooked. It wasn’t very tender, and didn’t have any great flavours popping out at me. A little bit disappointing, in my opinion, so the point goes to MEAT for chicken. As for sides, the fries were nothing amazing. Just your typical fries, relatively thick cut. Nothing compared to the garlic fries that you can get from MEAT. I would also have to say the same about the potato salad. The common theme between the potato salad here and MEAT would have to be the dill. They both use a generous amount of dill. Neither were particularly amazing though. The maque choux was something that I was intrigued by, because I’ve never seen it before. It’s basically a dish from Louisiana, and it’s traditionally corn, peppers, onion, garlic, celery, and tomato. Overall, I thought that it was interesting, I really like corn. Ours had little bits of sausage in it, which was a bit different. Nothing overly amazing though.

The Brisket was pretty good! I did some reading between the differences of chopped versus sliced brisket. There’s a bit of debate between which is ‘better’ but it ultimately comes down to the part of the brisket that you get. The exterior of the brisket is harder to slice, so it often gets served chopped up and pulled. Also, it depends on how it’s served, e.g. in a sandwich or standalone. The brisket at both places were really good though. The Jalapeno mac and cheese was really good! You can really taste the jalapeno, and you get nice and creamy cheese. It was topped off with some bacon. The noodles were cooked perfectly al dente and was nice and firm. It really took on the cheese, and overall, this was a great dish.

The other sides we had, were the corn bread, and coleslaw. A lot of our dishes came with sides, and there are a fair amount to choose from. The corn bread is nice and sweet. It was a little bit on the dry side, but still very enjoyable. It’s really good to eat with the brisket and pulled pork. The coleslaw was decent. Not too much dressing, and pretty fresh. Overall, I can definitely say I enjoyed Sloppy Hogg’s. I like how they have a loyal customer base. The portion sizes here are way better compared to MEAT, however I would have to say that the quality at MEAT is a bit better. Another thing that can be said about this place is that you have A LOT of options. You can get a lot more southern dishes, like catfish, and jambalaya. They even have a mix plate of sausages where you can try kangaroo sausage, alligator sausage, and a lot of other exotic things! I definitely need to come back and try a few of these things. They also have a sister restaurant right next door where you can try some of these exotic meats called “The Dog“. There’s so many different things that you can get here, and you always get a nicely sized portion. If I were just looking for smoked meat and and the classics, I’d probably go to MEAT, but Sloppy Hogg’s offers so many different things as well.