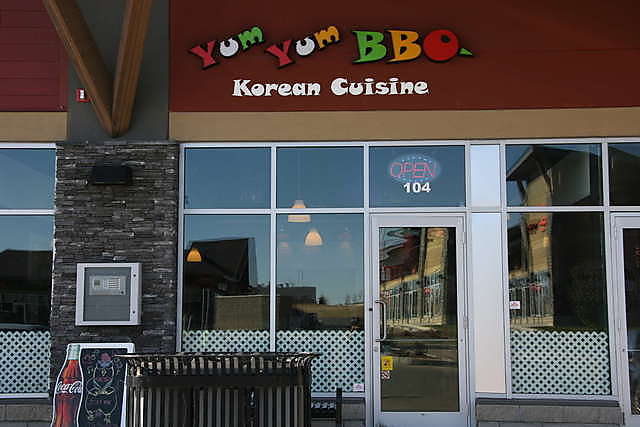 A few weekends ago, I was in Calgary visiting some extended family. My aunt from Vietnam was leaving to go back soon, so we just had a last small gathering. I’ve always been told that the food scene in Calgary was much better than the one in Edmonton, so I attempt to try at least one place whenever I visit. My cousins wanted to take me to a place that served Korean fried chicken, cause they thought it was one of the better places that they’ve ever had it, Yum Yum Chicken and BBQ Korean Cuisine. This is a small chain that exists in Calgary, with about 4-5 locations around Calgary, with one being in Airdrie, which my cousins claim to be the best location.

The inside of it is much like Coco’s Deep Fried Chicken in Edmonton. Small, with little seating for dining in. I think most people always opt to do take out anyways. You can get burgers, fries, and some other fare here, but they are mostly known for their chicken, so that’s what we got.

We got a family pack, because we had a lot of mouths to feed. We decided on the shallots chicken, and their signature yum yum sauce chicken. This came with some fries, but these seemed to be just store-bought crinkle cut fries, so I won’t write much about them.

The shallots chicken comes with shredded green onions or shallots that are placed on top. The chicken was pretty tasty. It had a nice sweetness to it, and you could detect a hint of cinnamon which was a little bit different from any of the other chicken places that I’ve been to. The skin was very crispy, to the point that every bite was crunchy. Nice and crisp. The pieces of chicken here were a lot smaller than the ones at It’ Dog and Coco’s Deep Fried Chicken though, in Edmonton.

The other type of chicken we had was their signature Yum Yum chicken. It was pretty good. The sauce wasn’t too strong and rich, and did not overpower the chicken. This sauce wasn’t spicy at all. It’s nice and mild, with a little bit of sweetness. It’s pretty comparable to the other Korean Fried chicken places that I’ve had in Edmonton.

The problem with Calgary is that if you want to go anywhere, nothing is convenient to get to. No matter where you go, in order to get from point A to point B, you have to take some sort of highway, and drive at least 25 minutes.

Overall, I’d have to say the chicken was pretty good. I did like the shallots on the chicken quite a bit. And I do like how you have a lot more options at Yum Yum’s though. Either way, it’s delicious Korean Fried chicken, so if you’re in the area, or willing to drive into Airdrie, definitely check this place out!