There are a limited amount of places in Edmonton to get some really good Korean Fried Chicken, and from what I’ve heard, Coco Deep Fried Chicken is one of them. For those who don’t know what Korean Fried Chicken is, it’s basically fried chicken, but it differs in that it’s fried twice. That’s right, they take something that’s already delicious (Fried Chicken), and then fry it again. It results in a crispier chicken that is absolutely heavenly.

Coco Deep Fried Chicken was originally located south of Edmonton, right off Parson’s road at around 34th avenue, but since have moved (or so I’m told), to the north side (and locations on the west), to 132 avenue. They specialize mostly in fried chicken, from pieces, to strips, including chicken and waffles.

Coco’s is not much to look at on the outside. It’s located in a little strip ‘mall’. Also, from the looks of it, they mostly cater to take-out. There are a few tables inside where you can sit and eat, but it’s pretty limited. I only tried the half and half chicken and split it with my cousin, Thomas. They do have a few other side options such as fries, onion rings, sweet potatoes and random salads but I opted to have what they specialize in, because we weren’t super hungry. The prices here are pretty average when it comes to fried chicken. I find that fried chicken in general is pretty expensive (have you seen the prices at Kentucky Fried Chicken lately?). Korean Fried Chicken is probably the best value in terms of fried chicken, in my opinion, and they come with good sauces as well!

I ordered the 10-pieces half and half chicken to get the best of both worlds. When I see 10 pieces, or like 2 pieces for their lunch items, I think that it’s going to be pretty small portions. In my mind, I just think like wings or something, like 2 pieces of chicken won’t satisfy me. You actually get huge pieces of chicken and 10 pieces was more than enough for two people (we had to pack it up and bring it home!). The plain crispy deep fried chicken was pretty good. It came out very hot and a bit hard to handle so we had to let it cool down a bit. There were some pretty meaty pieces of chicken, with really crispy exterior. The first few bites are always the best, where you get a lot of the crispy skin. It was really light and not too salty. On the thicker pieces of chicken, the inside got a little bit bland. Otherwise, it was pretty good.

Came to their northside location. It was my first time since they’ve moved and I got their combination with 4 kinds of chicken. Snow cheese, Original, Onion, and Sweet and Spicy. I got it with sauce on the side. My favourite of this bunch would be the snow cheese. It had a nice texture and added a nice flavour to the chicken. Definitely would get this one again. Overall, a nice choice for Korean Fried Chicken! I really enjoy it there. Seoul Fried chicken and Co Co would have to be my two favourites in the city right now. 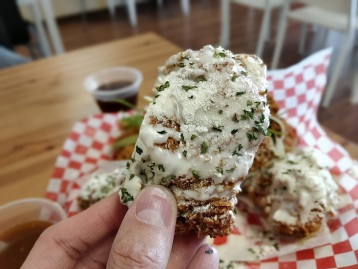