Ahh The Sugar bowl… sweetest place since 1943, or so it says on their website. They changed around from a burger joint in the 40’s and 50’s to a coffee shop in the 60’s and 70’s. In the 80’s, they changed to a bistro/pub and haven’t looked back since. Having changed to a pub, they specialize in having an extensive selection of Craft and Belgian beer. Sugar bowl was also featured on You Gotta Eat Here” in July of 2012. If you want to check it out, I’ve included the link at the bottom of my post. They featured their famous cinnamon buns, chicken and waffles, and goat cheese and lamb burger. I’ve been here a number of times for breakfast and brunch, and occasionally for dinner and each time it is completely full to the brim.

It’s located in the same area of High Level Diner so again, parking is a bit sparse. It’s right in the Garneau/University area. There’s some street parking in and around the area but if you’re coming for breakfast or brunch on the weekend, you better be really lucky because parking can get a bit competitive, what with both High Level Diner also being adjacent.

Right when you walk in, you can already feel the great atmosphere and ambiance. It’s a relatively small space, and you can feel everyone’s good mood from the smiles around the room. They have art all around their brick walls, with wooden tables and chairs throughout. It can get pretty cozy in there when it’s completely packed and the chatter can get pretty loud, and this is only in the morning! In the evening/night, it can get even louder and rowdier, as they feature tons of different kinds of beer on tap. Needless to say, both their dinner and breakfast fares brings in a large crowd.

Out of all the times I’ve been here for breakfast and brunch (I think 5-6 times now), I’ve only successfully ordered the cinnamon buns twice. They are incredibly elusive. They only make a certain amount everyday, and when they are out, that is it. I highly recommend them if you’re able to get there early enough! Luckily, they revealed their cinnamon bun recipe a few years back to CBC so you can make your own at home. I’ve included a link at the bottom of my post! (They also revealed the recipe for their delicious lamb burger as well). They have a relatively simple menu for breakfast/brunch, and serve a lot of the classics, e.g. waffles, eggs/bacon, etc. They always have different daily omelettes, sandwiches, and burritos, so you can always get something a little bit different each time!

Here is a picture of the breakfast burrito that I had a while back. Definite appeal for this was the low price of 8$. The burrito and sandwich are changed daily. On this occasion, mine was filled with scrambled eggs, cheddar cheese, feta cheese, avocado, and some chicken, served with a little side of the salsa verde. It was relatively tasty. Everything in the burrito went well together. By itself, it wasn’t super amazing, but if you eat it with the salsa verde, it compliments the chicken well. The salsa verde had a nice flavour to it and adds a nice kick. It is pretty strong, but fresh, having almost a bit of a mustard-ey/raddish-ey heat to it. It made the burrito a lot more agreeable to eat.

Lastly, I’ve been guilty of ordering their ‘SugarBowl Benny’ on one or more occasions. Two beautifully poached eggs served over a grilled corn bread with back bacon dressed with a lovely béchamel sauce with a side of hearty potatoes. This is their own take on classic eggs Benedict. The grilled cornbread instead of a traditional english muffin gives it a really southern taste (You should try their chicken and waffles if you want southern!). The back bacon is nice and soft, and the perfect thickness. It’s served with a béchamel sauce instead of a traditional Hollandaise sauce. It’s not nearly as rich as a Hollandaise sauce, but overall it was really creamy. As a personal preference, I think I would have rather have the traditional Hollandaise sauce, but I’m a really big fan of savoury and rich flavours. The potatoes were as expected, nice and hearty and well seasoned. Their ketchup had a nice tang to them and complimented the potatoes well.

Overall, each time I’ve been to the Sugar Bowl, I have left satisfied. The atmosphere is great, whether you’re just trying to enjoy a nice casual breakfast/brunch and catch up with a friend, or if you’re just there out for a nice evening dinner to kickback and have a few beer after work. The staff are friendly, and the decor gives you a homey feel. As promised, the links for the segment on “You Gotta Eat Here” and for the recipes for the cinnamon buns and lamb burger are below.

I came here in June of 2015 after work with a few of my colleagues for a going away meal, so here are some updates on my experience there.

The Charcuterie platter here was a bit underwhelming. I’ve had really good ones from other places. To be fair, it was a little bit on the cheaper side at only 14 dollars, but I still expected a little bit more food. The only preserves they had were a few different types of olives, and there was really little cheese on the platter. For 14 dollars, I’d rather get any of their menu items, like the pulled pork sandwich, lamb burger, (any of their sandwiches really).

This is their famous Lamb burger. It comes with free-run lamb, goat’s cheese, rosemary aioli, caramelized onion. I opted to get mine with a side of caesar salad. Overall it was a tasty burger. I could have done with a little bit more goat’s cheese, or if the burger was a bit more seasoned. I did find it a little bit bland, but overall it was pretty well done. It’s a really nice portion for what you pay for. I generally opt for a salad because fries and a burger make me really full.

Quick points on some dinner food I ate December 2017

Came back here in December of 2017 and ate some of their dinner foods. We had their feature burger, which was a banh mi burger, and their chorizo penne. 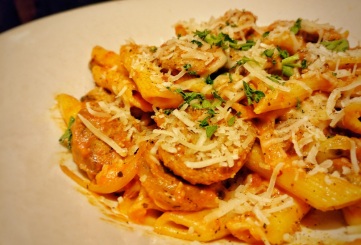 Both were really good! I really like the pickled veggies in the banh mi. The chorizo penne was a sizeable portion and also really good.

I keep forgetting this, but I always get the charcuterie board, but I’m always a bit disappointed. The cheese and meat are pretty good, but it’s such a small portion given the price! You might be better off getting other appetizers.